Being values-based implies a connection with oneself, a deep inner knowing. Embracing a purpose requires, so I argue here, a connection with the context in which we live and operate, a deep outer knowing. When these two senses are disconnected, we are in trouble, as individuals, as organizations and as societies at large. When the senses are aligned, thriving individually, as an organization and as a global community means thriving at all of these levels for the benefit and well-being of all.

Brené Brown recently said in an interview with Marie Forleo “our worth and our belonging are not negotiated with other people. We carry those inside of our hearts.” Brené is a widely recognized and respected psychologist in the domains of authenticity and vulnerability. She talks about how an individual can find herself, find her roots and core and how to stand up for herself and what matters to her. In many ways what she talks about has to do with finding one’s own purpose and identity or what she calls knowing who you truly are. To her, the importance of knowing who you are is key in living an authentic life as it ensures that you can always belong to yourself, rather than fitting in with what others might expect.

I can resonate with this and I understand the importance of what she says. How are we supposed to know what is right and what is wrong if we don’t know who we are and what that means in the context of what happens around us? This journey of self-knowing, of self-awareness, is a key component in the journey of being a responsible leader. It may well be the first and most important one, the dimension without which all the rest doesn’t really make sense. It certainly is critical to create role models that can serve others to find the courage to adapt their behavior and attitudes in order to re-connect with who they truly are. Or, as Lena Faraguna claims: “Lighthouses don’t go running all over the island looking for boats to save. They just stand there shining.” 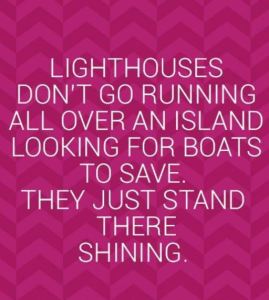 Quote and image by Lena Faraguna

Let me zoom out a bit. How would we translate this self-knowing, this inner self of self-belonging in the context of working with others, of teams, and of organizations? How can a sense of belonging among a group of people, be it a family of a company, be created without negotiating with others? How can a group of individuals that belong first and foremost to themselves ever belong to a greater cause? I am troubled when I imagine how a particularly purpose-oriented company, such as those that Kathy Miller described in her last blog, might do if it decides to “not negotiate with others because its self-worth is inside of its own purpose”. Isn’t that what we are accusing the modern corporation of doing? Of putting its own priorities first and to forget about the rest? Where is the line drawn? If investors and owners are part of the inner core, then profit-maximization sure makes sense. If they are not part of it (and how might they not?), then how can a company protect its interest from investors without negotiating? Tricky.

When adding a further dimension and zooming out to an entire society, what changes in that frame? If a society decides that it needs to first and foremost belong to itself, its citizens, and not negotiate with others, what might that mean? Wouldn’t we be moving very close to the explosive sense that nationalists are expressing when they say “my country first”? And when they start protecting themselves from perceived outside threats, such as immigrants, refugees and trade agreements?

There is something dangerous in all of this. And this might well also be the dangerous in purpose-oriented firms. Purpose, after all, means what? The dictionary says purpose is “the reason for which something is done”. Well, and that is the entire problem. That is not good enough. There are excellent reasons to do something and there are incredibly stupid reasons for doing other things. Let me take the three-step zoom back from society, to the organization to the individual.

A society that defines a purpose, or “raison d’être” as something that is distinctive from what is around it, will in the worst case create harm to other societies and possibly even to itself. Global well-being can only be achieved if a society, a nation, embraces the idea that it is fundamentally and indisputably a part of the larger context in which it operates. And finding a purpose that does not take this into account is potentially harmful, as the Swiss President and many other statesmen have pointed out after President Trump gave his disturbing “America First” speak at the UN SDG forum last week.

Zooming now in to an organization or a team, what does this mean? If an organization chooses a purpose that is purely self-serving and that may seem like the best way to survive and ride the increasingly turbulent waves of change, then this organization is also very likely to harm those around it, and as a result, potentially itself. The metaphor is the cancer cell that builds its growth on eating into the very organism that is providing its living substance until that organism has been emptied out and can no longer sustain the ongoing growth of these cells. That sounds ugly and I apologize. What I mean to say is that a purposeful organization is not good enough, if that purpose does not imply taking into account the well-being of the context in which the organization operates.

Further zooming in and back to the individual, I struggle to see how an individual can and should have a sense of identify to herself that is limited to herself only. It appears limiting and potentially dangerous. As it if was necessary to put up guards against something outside. As if that sense of inner belonging needed protecting. An inward journey of discovery will uncover, I am certain, that there is both nothing and everything that can shake you and me in our core. Nothing in the sense that we are who we are irrespective of what happens outside of us, our sense of self is based on how we see and talk to ourselves. Everything in the sense that we are shaped by the events in our lives and we respond to them, in the full understanding that we have no idea what lies ahead of us.

Let me attempt to conclude. In order for purpose and values to be aligned, an ongoing journey between the inner and the outer world in which we live is needed, allowing an emergent transformation as we advance. This allows a development of the inner knowing and the values we build on. In addition, purpose will need to be defined not just as the “reason for which something is done” but “the reason for which what is done serves the well-being of the next larger holon” or unit. Arthur Koestler coined the term holon (“whole”) as something that “simultanesouly a whole and a part”. Holacracy, which is founded on the principle of Holons, embraces this nicely as an operating system. A holon is a unit that is contained in another holon and that may (or not) contain other holons. Each sub-ordinate holon by definition must embrace the purpose of the holon of which it is a part and the entire system is guides by an overarching missing that should – and here Holacracy stops – again serve the next larger holon. Imagine if individuals would understand that we are holons, as parts of organizations, which in turn are holons as a part of societies, which in turn form a part of a global community, all while being in and of itself a whole that again contains other smaller holons. This understanding would allow an alignment of purpose and values based on the understanding that we are all a part of another, infinitely interconnected. 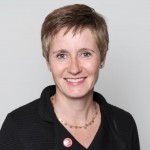 Dr. Katrin Muff is Director of the Institute for Business Sustainability in Lucerne, Switzerland and Professor of Practice at the LUISS Business School in Rome, Italy. She consults leaders and boards in business sustainability and strategic transformation, and runs an executive program together with Thomas Dyllick. Her book “Five Superpowers for Co-creators” provides insights about issue-centered multi-stakeholder processes. She brings 20 years of international strategic and general management experience in Europe, Australia, North America and Russia and a decade of leadership in business education. www.KatrinMuff.com