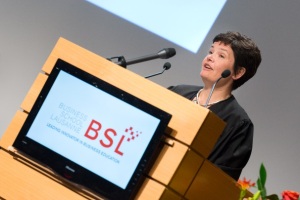 Kate Raworth left me with a question I could not answer: “How do we transform the ‘value-extraction’ mentality of the 20th century with the ‘designed-in benefits’ mindset needed in the 21st century?”. I walked home after a lovely dinner with her and pondered about why arguments that make total sense to some of us can be dismantled so easily by those who follow the profit-maximization drumbeat that has brought havoc to the world and economics in my lifetime. Kate had shared a story of well-regarded expert who proposed a cleverly designed building able to extract CO2 from its environment to a CFO. The CFO killed the genius idea with as little as: “But why should I do such thing? It doesn’t serve me!”

Kate was in Lausanne to inspire our graduating students along with Peter Bakker, President of the WBCSD, both recipients of BSL Dr. Honoris Causa awards. And they did! Peter shared a story of when he was CEO at TNT and his purchase of two long-haul planes doubled the CO2 footprint of his company in one year. The planes served to fly mobile phone from China to Europe – customers like their orders fulfilled overnight irrespective of the cost to nature. He reminded the graduates that the origin of leadership is “path finder” and that they were more than ever required to serve exactly that; as pathfinders to bring organizations to be the positive force our future needs.

Kigen Moi, the BSL Valedictorian, talked about Ubuntu, a word well known where he grew up “Humanity”. Or, as his story illustrated, the idea that no one can be happy, if the others around him are not. Such a profound thought which stands in such stark contrast to Kate’s struggles we had debated the night before.

I am struck by an oldish HuffPost blog entitled “There is no trade-off between profit and purpose” and that Paul Polman had recently retweeted with the words “To reach the land of profit, follow the road of purpose”. I have been a long advocate of using the right language to talk to various audiences. And that it is necessary to talk to those who see profit maximization as the holy grain by pointing out the immediate opportunity and risks of embracing business ideas that go beyond serving the interest of shareholders but at the same time also serve other stakeholders, society and the world at large.

To hell with it! Why should we adjust a values-based argument to a value-disconnected audience. Why cannot we not shake the CFO in Kate’s story to senses by responding with utter disbelief and exclaiming with wide-open eyes: “But how can you be happy if around you so many are unhappy? And let him reconnect with the humanity that undoubtedly sits inside of him, maybe underneath much dust and fast asleep, but most certainly alive and ticking. Why argue that purpose leads to profit, as if following purpose needed any excuse? Why having to point out there is no tradeoff between making money and doing good?

Why not shake the hearts and minds of those stuck in the 20th century logic of the misinterpretation of Adam Smith’s invisible hand? Take a look at the state of the world, the state of any single country of your choice and you can clearly and without a single doubt see that the profit-maximization argument has gotten it wrong. We have spent the last decade trying to twist purpose and values-based arguments into the ill-fatted logic of the past century and we have gotten nowhere. If we want to change the mindset that Kathy Miller and I are trying to figure out how to change, maybe the time is now ripe to start talking the truth. Kathy ended her last blog with a deep insight of Mahatma Gandhi: “You must not lose faith in humanity.  Humanity is an ocean; if a few drops of the ocean are dirty, the ocean does not become dirty.”

Why not point out the amazing power and the beauty of the invisible heart that is beating in every single living thing and that connects all of us into a humanity across all living beings. Why not question empty values and fake arguments, and why not replace them with the wisdom of Ubuntu and insist that we can only rest if all of us are happy that that we will no longer take part in a race against each other but in a journey towards a place where all of us can be well on that gorgeous planet we are living on. Why not?!

Katrin Muff is a thought leader in the transformative space of sustainability and responsibility. From 2008 to 2018, she led the Thought Leadership activities in the area of conceptual design at Business School Lausanne, where she acted as Dean from 2008-2015 until self-organization made such a title redundant. Under her leadership, the school focused its vision on entrepreneurship, responsibility and sustainability in education and research. Her business experience includes 10 years at ALCOA (GM in Russia, Industry Analyst for Global M&A in the U.S. and Business Analyst Europe), 3 years as Director, Strategic Planning EMEA at IAMS Europe (Procter&Gamble), and 3 years as a co-founder of Yupango, a coaching consultancy dedicated to start-ups and training management teams.