The other thought leaders were Max Oliva of the HUB Global and Teamlabs, Martin Cadée of The Journey Network and Knowmads, Traian Bruma who created CROS a student-led university in Romania and Rasmus Johnsen teaching philosophy at CBS in Copenhagen. What an amazing assembly of experience and creative vision in the emerging space of the future of management education. 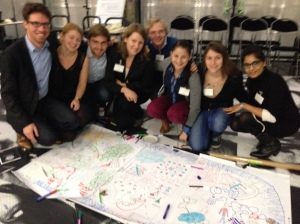 After a first day spent getting together onto the Journey and applying the Impact Canvas, inspired by the Osterwalder Business Model Generation Canvas, to various concrete projects within the OIKOS framework, day two was dedicated to co-creation. OIKOS is the largest sustainability-focused student organization world-wide with chapters on all continents. We facilitated the initial part of the co-creative process of the students which involved painting a picture of the future of the business school in 2 phases.

Phase 1 consisted of a first group of students of drawing together a picture of what such a university could or should look like. Phase 2 consisted of a second team inheriting the drawing and determining what role OIKOS might want to play in such a scenario. The discussions which accompanied the creative painting exercise were both fascinating and revealing. While we typically think that we need to first know what to point, thus starting with a lengthy debate that ends with a few hasty scribbles on a nearly empty page, our first group immediately attempted to visualize each idea they had about the future university on paper without fully understanding what was emerging or what the final picture might be. About half-way through, one part of team 1 who had worked mostly on one side of the drawing explained what they had ended up painting and vice-versa. The team exchanged places and enhanced the designs of their friends. What emerged what a comprehensive picture which shows the future university as an open space embedded in both society and the environment thus showing the larger planetary context, while also showing the journey of an individual student working on his quest (what do I want to do in future) in his own time, working both in the collaborative open space with facilitative professors, business professionals and thought leaders as well as within reflective spaces, moving back and forth between practical experiences in society (hospitals, businesses, etc.), creating their own individual curriculum in the process (see image 1). 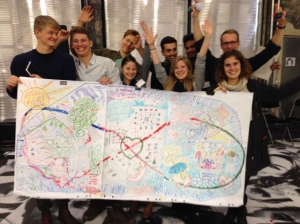 Phase 2 started with an immensely grateful new student team who was amazed by the creative piece of art the first team had drawn up for them. Their analysis of the picture opened the debate on what such a future university could be and what role OIKOS might want to play in there. The second team was nearly afraid to destroy the beautiful foundation work of the first team. Again, rather than trying to first finding the solution, they launched in daring to create a huge infinity loop all across the 3 posters indicating that OIKOS could be the connecting enablers supporting the student in her journey from society, the environment and the university and along her individual learning journey. The open space of the university ended up being the crossing over of the two lines which was drawn up into a green heart. The team furthermore highlighted the planetary context the first team had hinted at by filling in a blue background to the entire picture immensely strengthening the message and providing a common space which symbolized the potential of OIKOS as a universal platform of learning (see image 2).

What impressed me most is how effortlessly this creative process went along and how painting thoughts actually helped to develop thinking. We tend to think it works the other way around. We were accompanied by an amazing artist Klaus Elle who provided the visual track (as compared to the sound track) of what was going on. His ability to summarize sessions with one telling image must have seriously inspired us all!